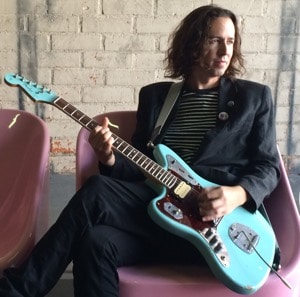 Ian started playing guitar around 12 years old, inspired by his dad’s record collection. He immediately started bands and was playing live within a year. During high school he played in his school’s Jazz Ensemble winning the Louis Armstrong Jazz Award. He also played in numerous local punk bands that recorded their own records and would constantly play all over California. This pattern continued after high school and led to Ian forming the hardcore punk band Death By Stereo.

As time went on, Ian toured as a hired gun in the emo pioneers Sense Field as well as Further Seems Forever. In 2006 Ian was recruited to join Rock N’ Roll superheroes, The Aquabats! full-time under the stage name “Eaglebones Falconhawk.” He also became a cast member and composer on the band’s Emmy award winning TV show, The Aquabats! Super
Show! that ran for three seasons on the now defunct HUB Network, but has since resurfaced on YouTube.

Along the way, Ian continued to perform and record with numerous bands alongside musicians from groups such as AFI, Atreyu, The Vandals, Good Charlotte, Panic! At The Disco, Yo Gabba Gabba, The Groovie Ghoulies, and The Ramones. Most notably, Ian co-wrote songs and played guitar on the solo record and tours of My Chemical Romance frontman, Gerard Way. Ian has 20+ years of recording and touring experience, having played on Billboard charting albums and to live crowds in over 25 countries and almost every state. He has played Warped Tour, Coachella, and Conan O’Brien.

He has played the smallest, sweatiest club, the largest amphitheater, and
everything in between. Ian is obsessed with guitar equipment and has been endorsed by numerous companies over the years. He is a recurring guest and host on Fender Play Live, a weekly live guitar educational program on YouTube produced by Fender guitars. Ian also writes a regular advice/opinion column for Guitar.com called “Major Keys.”

Find out more at TheAquabats!