He holds a Bachelor’s Degree in Electronic Music Production and Sound Design from esteemed Berklee College of Music in Boston.

Ryan began his music education with Classical piano and violin lessons as a child. However, it wasn’t until he picked up guitar and drum set as a teenager that he found his passion in pursuing music as a career. Gaining a wide range of experience from Classical piano competitions as well as performances in various high school rock bands, Ryan eventually took his talents to the Berklee College of Music, where he was admitted as a drum set principal. While at Berklee, Ryan became fascinated with the process of electronic music production, which requires a combination of recording and sound design knowledge, proficiency on a number of instruments, as well as an ear for musical arrangement. This deep interest ultimately influenced his decision to major in Electronic Music Production and Sound Design. In add 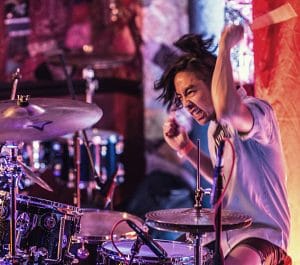 ition to his major, Ryan strove to deepen his knowledge of music theory by enrolling in Berklee’s advanced Jazz Harmony courses, as well as courses in Atonal Solfege and the Musical Analysis of Stravinsky’s repertoire. Outside of his classes, Ryan also gigged frequently during his time in Boston. He was involved with a number of projects: he recorded and performed drums for The Colonnade, guitar for Quarrels, and bass for Wolfbeater. He also conceived his visceral electronic act, HØUNDS, towards the end of his Berklee education, an act that he performs as to this day. On top of his involvement with a wide variety of projects, Ryan also performed for a wide variety of crowds. Over the course of his Berklee career, he has played gigs ranging from punk shows in house basements, to live radio performances at Harvard University, to full-scale productions at Berklee’s esteemed Performance Center. Since graduating from Berklee, Ryan has worked in Boston, New York City, and Los Angeles. He has scored a number of short films, a couple of which have gone on to win awards at nationally recognized film festivals. He has also written music for television shows broadcasted by Fox Networks, Dreamworks, and Netflix. Ryan also performs and collaborates frequently with musicians in Los Angeles and San Diego. Aside from music, he works on the side as a visual artist, as well as a sound designer for animation. Ryan first found his passion for teaching while at Berklee, when he began to offer freelance tutoring in music production to younger students. He has continued to teach to this day, providing lessons in production, arrangement, sound design, and songwriting in his home studio. For Ryan, the most fulfilling part of teaching music is seeing his students willingness to learn, not because they have to, but because they truly want to.

He believes that as long as the fundamental passion and curiosity is there, all it takes is the right attitude and mindset to reach one’s goals as a musician.