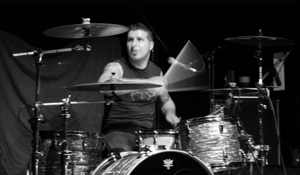 Drummer, guitars, vocals and songwriting for Stealth by Starlight’s album “Lost and Found”

Sean M. Walbrink began his musical journey at the age of 12 in the music room of his parents house in Laguna Niguel playing guitar. During the summers, Sean and his older sister spent hours playing songs they heard on the radio and MTV.  Covering songs from bands Nirvana, Hole and many others from the grunge era, these summer jam sessions gave Sean the confidence and skills needed to start writing songs and then forming a band of his own in the 7th grade.

In 1996 Sean attended Aliso Niguel High School. The next four years were filled with discovering new bands, going to shows, and collecting records. Throughout the teenage years Sean continued to develop songwriting and musicianship skills, playing in bands with friends and performing at local fairs and school events. In addition to being a frontman and guitar player, Sean took interest in playing drums. Throughout high school he continued to develop his drumming skills, playing for his local youth group at Coast Hills Community Church and the high school battle of the bands. In 2005, Sean now 23, met two local Laguna Beach street musicians in need of a drummer. With snare drum and brushes in hand Sean joined the trio, bonded quickly, and the band Faraway Boys was born. Their wild street performances gained them a huge local following and opened many doors for them in the local club scene. Before disbanding in 2010, Faraway Boys shared the bill with notable acts such as The Blasters, NOFX and the Stray Cat Lee Rocker. Their 2008 release Pirate Ship Set Sail is still available on iTunes and is considered to be a staple among the local music scene.

After years of touring and playing shows all over the Untied States, Sean decided to take the next step of his drumming journey enrolling in the drum program at Musician’s Institute in Hollywood. Here he studied with some of the best drummers in the business and was exposed to many different musical styles such as Latin, Jazz and Rock. MI also gave him the opportunity to audition for his heros Social Distortion as well as serve a internship at Side One Dummy Records in Hollywood. Sean graduated in 2011 with his degree in percussion performance and music business. Currently Sean performs with his band Stealth By Starlight taking up lead vocal and guitar duties. Stealth By Starlight released their debut album Lost & Found in 2012 on Sean’s label Team Fun Entertainment and continue to build a following playing local clubs. Sean is also putting his drumming skills and knowledge to work being the newest addition to the drum department at Los Rios Rock School.