Spencer Askin started playing guitar at age 12. When he was 13, he joined his first band. He has been gigging regularly ever since. Spencer’s dedication to music at such a young age has allowed him to share the stage with various well-known, established performers. He has opened for Buckcherry, Lynch Mob, and the Lemonheads, just to name a few. Today, Spencer, now 22, can be seen on stage fronting his own band, The Gromble. He sings, plays guitar, and even the occasional trumpet, for the Orange County indie/alternative rock band formed in the summer of 2009.

The Gromble is signed on 37 Records. They released a self-titled EP on the label in December of 2010. It is available on iTunes. 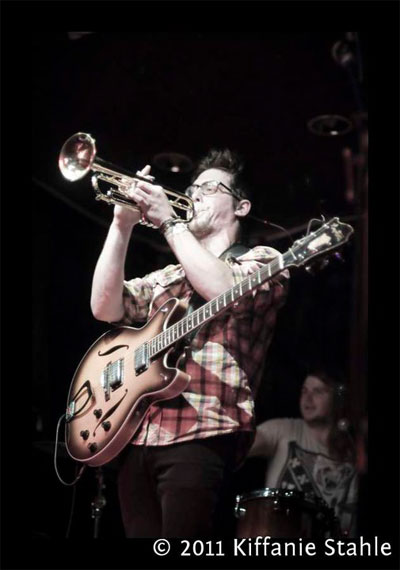 The band was nominated for four Orange County Music Awards, including Best Live Band. With influences such as Weezer, the Pixies, and Pavement, The Gromble is finding itself winning over fans and playing to packed houses. Spencer and The Gromble are currently working on a full length album to be released summer of 2012. Spencer writes the bulk of the lyrics and says the upcoming release is self produced but sounds like a bigger production with full orchestral arrangements.

Spencer studied three years of jazz guitar at Saddleback College. He has five years of private teaching experience. Los Rios Rock School is thrilled to have Spencer Askin on its teaching staff. Spencer’s interest in diverse music genres allows him to teach guitar, bass, and trumpet. He also teaches ukulele, drums, and beginning piano. He uses his real-life music experiences to mentor the students at Los Rios Rock School in theory, voice, songwriting and performance.