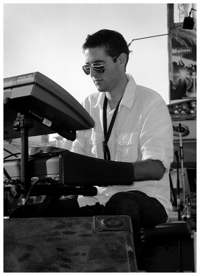 Spencer Wiles was born to be a musician. He is following in the footsteps of his father who was a talented musician in his own right. As an infant, Spencer would sit on his dad’s lap at one of his keyboards, headphones on, and was encouraged to touch the keys with his tiny fingers and listen to the sounds that he created. He grew up with a multitude of his father’s instruments at his disposal – piano, keyboards, guitars, wind instruments, and accordion, to name a few. His dad taught him fundamental music theory, and the importance of practicing. When his parents bought a piano, Spencer played at every opportunity, teaching himself when his dad wasn’t teaching him.

He started his formal education in music in 6th grade. He began on flute but soon switched to saxophone, where he found his voice. Spencer continued playing saxophone in both concert band and jazz band at Rancho Santa Margarita Intermediate. He won awards for Outstanding Saxophonist and for his original compositions in both 7th and 8th grades.

Spencer continued on his musical path at Trabuco Hills High School where he performed in every ensemble offered – jazz band, marching band, wind ensemble, orchestra and drumline. During his high school career, he won multiple awards for both his solo and ensemble performances. Outside of academic instruction Spencer ventured into rock and roll music where he exercised his keyboard and compositional talents and began gigging across Southern California. 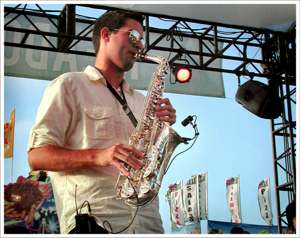 Spencer, now 22, is currently earning his degree in both Jazz Studies and Music Composition at Saddleback College under the mentorship of Joey Sellers. In addition to piano, Spencer is striving to become a woodwind doubler by honing his skills on saxophone, flute, and clarinet. He has performed in an eclectic mix of genres including jazz big band and combo, rock, pop, blues, classical, klezmer and Irish folk music.

Spencer composes his own music, as well as arranges for others. He has scored pieces ranging from smaller chamber ensembles to full jazz orchestras. He brought these skill sets to his most recent endeavor, The Gromble, where he was initially contracted to custom arrange string and horn parts for the band’s upcoming full-length album but, after further collaboration, would ultimately become a member.

Spencer performs professionally at local venues, and has performed at major venues, such as the Greek Theatre and Planet Hollywood in Las Vegas. He also coaches and substitute teaches at local Orange County schools, both public and private and has given private instruction on saxophone for the last two years.

As a student, teacher, composer, arranger, and performer Spencer continues to pursue his passion in life. He realizes the importance of having musical mentors, and looks forward to giving his experience to Los Rios Rock School students.