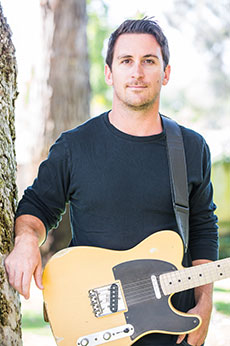 Justin Norman was given his first acoustic guitar for his 10th birthday, and after six months had performed his first “solo act” for an elementary school talent show inSacramento. By the time he was 11, he was playing in the local church youth group regularly and knew he had found a new love to compete with sports. By the time Justin wasin high school, he was in various rock bands performing at local venues, private parties, and churches with Matthew Logan Vasquez and Phil Allen (Grammy Award winning engineer/producer for Adele/Pink/others). Hegrew up listening to classic rock & roll, but was inspired by the likes of local guitar heroMarc Seal to dive into the works of technical guitarists like John Petrucci (DreamTheater/LTE), Joe Satriani, Paul Gilbert, and others in the virtuoso vein. Justin took his first music theory class his junior year with RayWoods at Dana Hills High School and was soon to learn that he had an ear for musical composition not just confined to a guitar alone. These foundational classes paved the way for what was to be the beginning of his real musical journey.

At 19, Justin moved to Hollywood to attend Musicians Institute, where he was exposed to top-notch jazz, fusion, rock, and country music players. He had the opportunity to pick the brains of who he felt were some of the best private instructors in the world. After a year of learning and networking,Justin was asked to join an up-and-coming band called The Confession as a lead guitarist. He recorded a full length album with the group before hitting the road several times, opening for bands like AvengedSevenfold and Megadeth as well as being part of two Warped Tours (2006 & 2007). During this time, he was sponsored by Dean Guitars.

After two years of off-and-on touring, Justin decided to go his separate way from the group and his touring days in the metal world were over. He plays locally with various artists/friends, both in the studio and a live scenario. In 2011, he joined some of these friends in performing live on America’s GotTalent, backing Michael Grimm (AGT Winner). To this day, he’s had the opportunity to play in small, intimate settings with the likes of the Van Halen brothers and Tre Cool (Green Day), of whom he has recorded a few songs in a group called Bubu & The Brood, featuring Tre’s wife Sara Wright as lead vocalist. He has also released two solo instrumental records called Introspectrum (2016) and SacredSpace (2018).

Justin has been a private instructor and live group director at Los Rios Rock School in San JuanCapistrano for nearly 7 years now. He has returned to teaching because he has found that: “Music, and the ability to express oneself by playing music with others, can bring a certain unequivocal joy through all seasons of life, and it’s important that the young people today understand this.” He specializes in guitar but has a keen ear for bass, drums, piano, and other instruments. He also loves to help other artists from a producer/composer standpoint, creating and arranging music. He wants to share his gifts and experiences with the eager hearts willing to learn.